Germany is the land of the castles. Not just any castles either, the most storybook, picturesque, and cutest castles you can imagine. No other castle is more iconic and known around the world than the Neuschwanstein castle in Bavaria. It’s likely you’ve seen pictures of this impossibly cute castle at some point in your life but perhaps never knew its name, history, or whereabouts. After all, this is the castle that the Disney movie Sleeping Beauty (and probably many more) is based off, and you can easily see why.

So if you’re into impossibly cute fairy tale castles that inspired countless Disney movies, and you just happen to be traveling through Southern Germany, look no further than the Neuschwanstein Castle as a first visit!

Perhaps the most interesting thing about this castle is its history as it’s unlike most other castles in Germany. Most people look at castles and imagine a king perched atop a throne ruling a mighty kingdom. Neuschwanstein, as grand as it is, must have been the epicenter of a great kingdom.

Neuschwanstein was to be the home for King Ludwig II of Bavaria, commonly known as the fairy tale king. This is because he built it for himself when he lost power after Austria and Bavaria were conquered in Austro-Prussian war. He was stripped of his powers as king so he retreated to his lands and began to construct opulent castles to live out his fantasy life as a true king.

Neuschwanstein is very new as far as castles go, with construction beginning in 1868 and finishing 23 years later. It was designed to have 200 rooms, with all of the space for King Ludwig II himself. It was designed on the hillside so it was not easily accessible by the outside world. Ironically enough, Neuschwanstein is nowadays the most visited castle in the world.

The engineering architect was Eduard Riedel (after 1874, Georg Dollmann; from 1886 to 1892 Julius Hofmann), and Neuschwanstein is an engineering marvel. The castle’s construction lasted 23 years, until long after Ludwig’s death. Although built in the Germanic late Romanesque style of the 13th century, the castle was equipped with the best technology available in the late 1860s. Quite unlike any real medieval castle, Neuschwanstein has a forced-air central heating system. Its rarely-used kitchen was of the most advanced design. The winter garden features a large sliding glass door.

However, the kingdom Ludwig imagined never came to fruition as foreign banks moved to seize his property as debts became due. Ludwig refused to concede and the Government declared him clinically insane, or so the story goes. Ludwig moved into his abode in 1884 for a total of 11 nights before he was found dead in the lake nearby to the castle.

Read Also On Johnny Africa:  The Ultimate Guide To Living In Frankfurt, Germany

Nowadays, Neuschwanstein brings in a lot of tourism dollars to the state of  Bavaria and is probably the most commonly used photo to depict Bavaria (and for good reason!)

Getting to Neuschwanstein Castle

The Neuschwanstein castle is located in southern Bavaria on the border between Germany and Austria. The beautiful Bavarian town of Fussen, a worthwhile stop in and of itself, is the closet town. It’s also one of the stops along the Romantic road which is a fantastic road trip through Bavaria stopping at stunning towns like Rothenburg ob der Tauber, and visiting countless castles. I haven’t done this trip in its entirety yet but it’s certainly on the list while I’m living in Germany.

If you’re not road tripping on the Romantic Road, it’s likely you’ll be starting out in Munich, which is the closest major city to the Neuschwanstein castle. From Munich, you’ll want to take the train to Füssen (which is about 2 hours one way). I would highly recommend buying the Bavaria ticket which covers the train and the bus you will need to take once you get to Füssen.

The train from Munich to Fussen leaves multiple times a day. Make sure you take the right train as some routes will say it goes to Fussen, but it takes a roundabout way making you transfer trains and increases your travel time to 3+ hours! 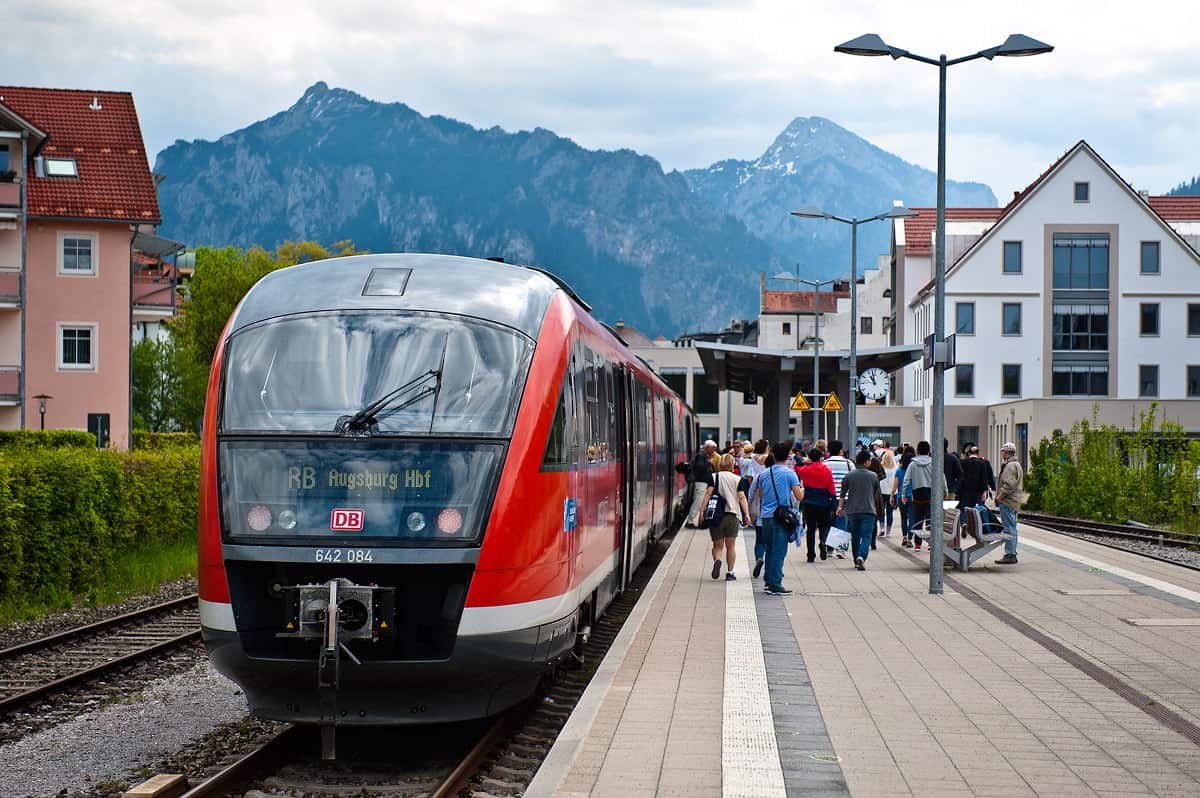 Once you arrive in Fussen, walk directly out of the train station to the parking lot, where you’ll see 1-2 buses waiting, which will be numbers 73 and/or 78. The drivers will probably be calling out “Neuschwanstein” and hoarding the crowds into one place. Don’t worry, they all know you’re here to live out your childhood Disney dreams, along with the hundred others who are also there for the same reason.

These buses are timed to be ready and waiting for train arrivals from Munich to transport those visiting Neuschwanstein Castle.

Like most of the castles in Germany, you can take a tour of the castle’s interior. Neuschwanstein certainly seems like a castle you’d want to see the interior of. However, it’s not as easy as just walking up to the castle and joining a tour.

Neuschwanstein is Germany’s most popular castle and given how small it is in comparison to places like the Schonnbrun palace in Vienna, there is only so much touring to go around.

Book your tickets ahead of time

Therefore, it is an absolute must to book tickets ahead of time. If you’re set on entering the castle on a tour, do not wait until you arrive at the information center because there’s a high chance it will be sold out. Book your tickets in at least a few days in advance on their website.

The cost of the ticket is €13 for the guided tour. For €20 you can get access to both the Neuschwanstein and the Hohenschwangau castle in the same town. You can’t enter the castle without a tour ticket, but you can walk the trails and view the castle from outside. The guided tour only visits a few rooms of the castle, but it is well worth seeing the interior if you have the time.

I never went inside the castle as I did not get my tickets in time and they were already sold out by the time I arrived. I have another friend that did do the tour and said the inside is worth seeing, but it is not anything special (which I kind of gathered before I even visited).

How To Get To The Castle

Once you’ve been dropped off the bus from Fussen, you’ll be in the little village of Hohenschwangau. I’m not sure if anyone really lives in this town as it seems like the a huge tourist center dedicated to the Neuschwanstein and Schwangau castles.

Yes, you can actually stay at a hotel at the base of the Neuschwanstein hotel. There is only one hotel here called the Schlosshotel (which means Castle Hotel) Neuschwanstein.  This also doubles a restaurant if you want to eat something while touring the castle. It’s also not that expensive to stay here (roughly €100-€200 a night) and you are literally a stone’s throw away from the castle.

Hike up to the castle

From the information center, you will see clearly marked signs for the Neuschwanstein that will lead you to a trail that ascends towards the castle. You can’t really miss the huge castle perched atop the hill from anywhere in the town, so its’ quite hard to get lost.

If you are hungry, which we were as we stopped here on the drive back from skiing in the Dolomites, there are plenty of food stands here selling wursts, coffee, schnitzels and the like. There are some that are just to go type of stands, and a hand full of sit down restaurants. I would probably avoid eating here if I could as it seemed like it was mostly geared towards tourists but the wursts were wursts! In total, it is roughly 20 to 30 minutes to hike to the castle. It’s not a strenuous hike by any means as there’s paved road the entire way. I can imagine in the summer months when the temperatures in into the mid 30s, this could be a tough hike but I visited in the winter months when it was around 10-15 degrees. As you hike up, you’ll pass by the Schlosshotel and a convenience store where you can buy snacks like wurstchens, beers, and the most expensive water of your life (€3.50).

Once you get to the castle, you can walk to the main castle square as well as numerous viewpoints that look up at the castle.

Say what you will about it being a huge tourist attraction, but the castle is very impressive. The construction is impeccable, and its condition is so pristine. It’s also massive making you appreciate just how much more equal society is nowadays.

Once you’re done gawking at the castle, walk towards the bridge viewpoint. From the castle itself, you’ll see a pathway for the Marienbrucke (Marien Bridge) which will afford you spectacular views of the castle and its surroundings. It’s from this bridge that some of the most iconic pictures are taken.

The walk takes roughly another 15-20 minutes but is a bit easier than the initial ascent. It’s roughly another 15 minutes walking from the castle to the bridge and it’s an absolute must to see it from this vantage point.

The bridge can be a bit scary for those that are scared of heights. It’s about 100m above a river and similarly to the Geierlay bridge in the Rheinland Pfalz, it is a bit wobbly! It’s also packed with people at pretty much all times of the day so if claustrophobia is not your thing either, you may have a bad day here. Which leads me to the next point…

Walk past the Marienbrucke for better pictures

I think the best picture opportunities are walking past the bridge. There are rustic trails that lead up the hill where you have unobstructed viewpoints of the castle with very few people around you. You’ll need to do some climbing around rocks to get to the top but it’s very much worth it. Kind of reminds me of walking up the rocks on Lion’s Head in Cape Town. Once you’ve found a good spot, sit back and enjoy the views. Wouldn’t be a bad place to have a beer or open a bottle of wine either! And of course, make sure to take plenty of pictures. 12 Amazing Things to Do in Bamberg, Germany: Bavaria’s Hidden Gem

Top 16 Things To Do In Regensburg, Germany 10 Amazing Things To Do In Nuremberg, Germany